So you've landed a job and you're a month or two in. It's not exactly the dream job you thought it was going to be. Your boss has a penchant for hovering over the female employees a little bit too long when he's not busy naming and shaming under-performers at 5 hour marathon meetings that go well into the evening. Your time tracker seems to be mysteriously changed every week to show you put in no overtime, even though you were basically working all weekend. There's a sour atmosphere in the office as everybody has put up with years of this crap (and much more) already, but there's nowhere else that will hire them at this point so they're stuck until they retire or have a mental breakdown. Unfortunately, you've found yourself at a black company.

If you've been looking around for work in Japan for any amount of time you may have heard of something called a "black company." The term in Japanese is ブラック企業 burakku kigyou, and trust me when I say you want nothing to do with these companies. They are mismanaged to the point of abuse in many cases, and unless you have a defined time limit (like a short term contract), you'll be wasting some of your most important working years for little benefit.

On September 30, 2016 the government announced that the suicide of ex-Dentsu employee Matsuri Takahashi was directly caused by excessive overwork. In the following weeks, both local and international press ran endless articles on the cause of death, ultimately forcing Dentsu to implement a “lights out” policy on October 25. Many angry readers called for the boycotting of Dentsu in the comments sections of online articles. Others cited how the inefficiencies of Japanese office culture and loyalty to the company kept employees chained to their seats. With Prime Minister Abe now looking to combat excessive overtime to bring Japan back into the competitive arena globally, the time has come to push for change and a better work-life balance for the beleaguered salary workforce.

How About An Honest Discussion On Japan's Overwork Addiction, Colten Nahrebeski and Donny Kimball

Back when the majority of labour was physical labour in the form of manufacturing, agriculture, and other areas where there was a direct tie of time to output, a company could get more out of an employee sometimes by pushing them. 40 hours could become 80 hours for a period of time, and profits would increase.

With the introduction of IT, and a shift to more intellectually demanding jobs where strategy and creativity are required, pushing an employee to double their working hours often results in mental burnout and in fact lower productivity. Unfortunately, some company directors seem to have missed the memo and they regularly expect employees to be robots, capable of performing at top levels week after week with unrealistic workloads and working hours.

Beyond that, there are also claims of power harassment, sexual harassment, and all a general culture of shame and tension.

In Japan, these black companies are known for ignoring certain labour laws, withholding pay, and abusing employees. I urge you to avoid them at all costs. If you have two choices – staying where you are or coming to Japan to work for a black company – I highly recommend you stay where you are until a better opportunity comes along.

If you read Japanese well enough, this is an interesting resource where the top 10 "black companies" in Japan are described in detail as to why they are so black. http://blackcorpaward.blogspot.jp/

Due to the COVID-19 pandemic throughout 2020, the Black Company Awards team did not choose "winners", but the 2019 award standings name the following companies as being terrible places to work:

*The following "awards" are because these are voted as the blackest, worst companies to work for in Japan. They are not awards to be proud of.

#MeToo Award: The City of Nagasaki

Japan Times article that explains how it works in English: https://www.japantimes.co.jp/news/2017/11/27/national/nominees-announced-japans-sixth-annual-black-company-awards/#.Wv9lmNNuauU

Black companies can be difficult to identify from the outside

There are a few ways to identify black companies before you get hired, but unfortunately no technique is 100% guaranteed to work. Here is a list of 5 characteristics of black companies to watch out for:

If you speak to employees of a company and they admit they regularly work more than 45 hours of overtime in a month, odds are the company is (if not black), extremely inefficient, and your time won’t be valued. This is a problem because the only “output” you can count on being noticed by management and your peers will be butt-in-seat time. Is that how you want to live your life?

After the Dentsu case mentioned at the beginning of this article, it was determined that the line to cross for karoshi or "death by overwork" was 80 hours of overtime in a month. If that amount of overtime were to continue for an employee for 3 months, the company could be fined. If the employee were to die, then there would be grounds for a lawsuit against the company.

Overtime can be a serious problem at black companies. Be sure you're not signing up for more than you expected.

Some Japanese companies still operate on the outdated "6 day workweek" model where Saturdays are considered a working day as well. Fun fact: anecdotally, these companies also tend to pay low salaries as a thank you for your hard work.

The reality is that many companies now expect employees to be always available by email or messaging apps, crossing boundaries and subtly encouraging hours "off the clock." Many employees with take-home laptops will work late into the evening to catch up on unreasonable workloads, and find themselves at the mercy of their boss's demands.

When you get rid of the important boundary between "working time" and "personal time," you open yourself up to potential abuses of your time and your goodwill. It doesn't help that at black companies, the pervading company culture will be that everyone is watching each other all the time to see who goes home first, who doesn't answer a late night email, or who takes an extra 10 minutes at lunch despite working until midnight the night before.

Starting salaries in big Japanese companies for new graduates are not particularly high to begin with. Some companies have found ways to go even lower – sometimes on the grey side of the law.

As an example, I have seen many dispatch ALT (assistant language teacher) jobs here where teachers' salaries are pro-rated around major holiday times when they aren't teaching. For example, if the employee was already making a minimum amount, say ￥200,000 per month, these companies may only pay half during summer holidays or reduce pay around the New Year holidays when there are no classes. Whether or not you consider this the behavior of a "black company" is subjective, but I would certainly encourage you to look for a company that pays decent wages year round.

Even worse, at the truly black companies, they will go out of their way to schedule you so you are at the office all day, but your duties are broken up into chunks – between which they will refuse to pay you.

Let's take the aforementioned ALT as an example: they may have six 1-hour lessons throughout the day, spanning the hours of 8am to 8pm. Between those lessons, of course the expectation would be that they prepare for the next lesson, chat with students or parents, take care of small tasks around the office, etc. In a normal company that respects you and your time, you would be paid for this because those duties are part of your job and you're not really able use that time as free time. Japan's black companies, however, will argue that you're only really doing "work" when you are teaching, so your 12 hour workday only nets you wages for 6 hours. Brutal, and while "technically" sometimes legal, is that what your time is worth?

This actually seems to be a favorite tactic of many "traditional" companies in Japan, whether they are considered black or not. The trend in recent years has been for companies to include your "overtime bonus" upfront as part of your salary, so your salary may seem alright. However, if you read the contract, you'll note that it states "up to 30 hours overtime pay included" or something like that. This means that until you cross that number of hours, you will get no additional pay. If you were to break it down per hour, you may also find that the "overtime bonus" really isn't worth it as you approach 30 extra hours each month. These companies really should be paying overtime separately (in my opinion). 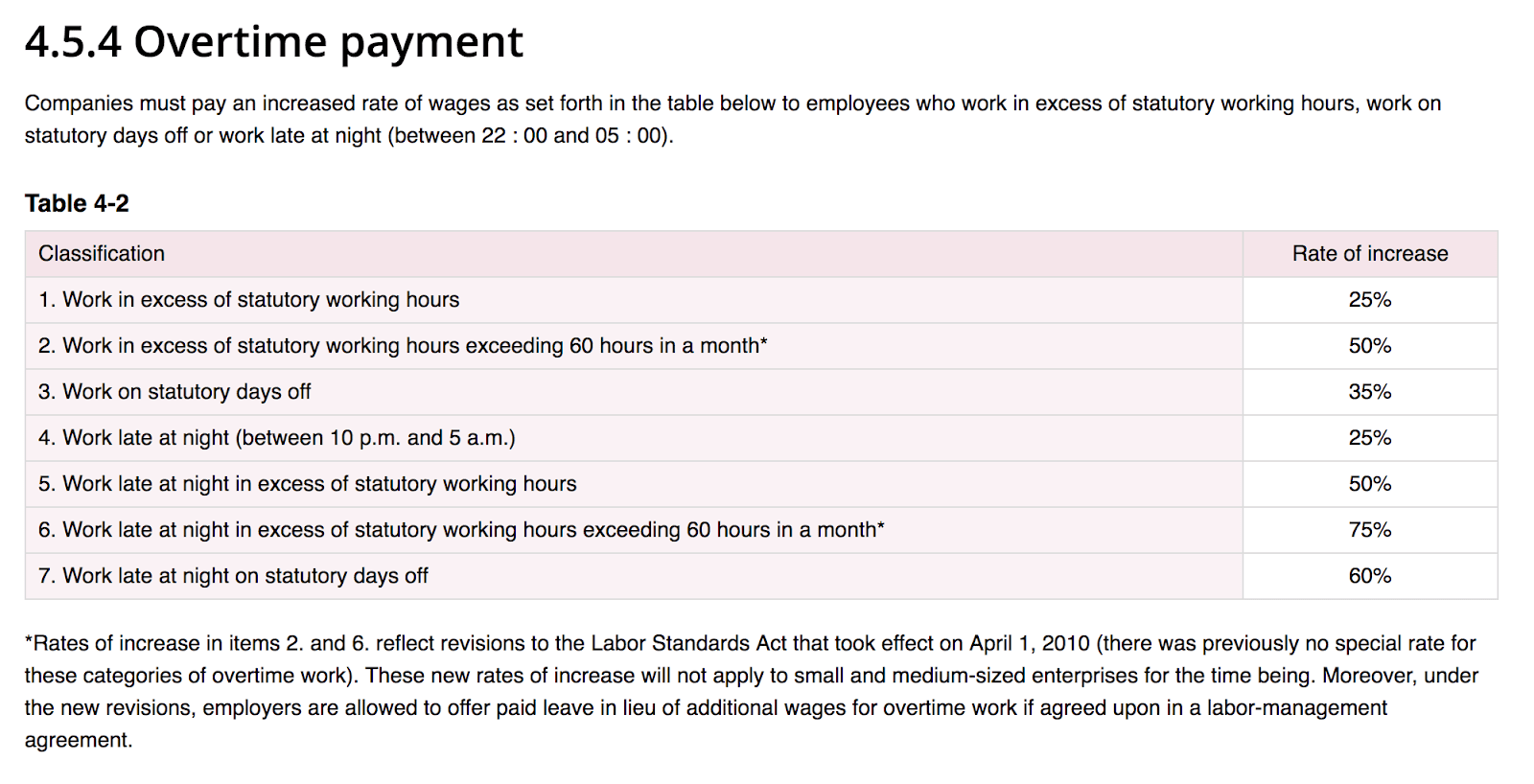 5. The Company Makes It Too Easy To Get A Job

Ever heard the saying "if it seems too good to be true, it is"?

The same goes for finding a job. If you take an interview with a company and that afternoon you get a call back saying they want to hire you, you may want to take a closer look at their reviews online or speak to some current employees.

The reason some black companies make it so easy to enter the company, is that to them, employees are disposable. They tend to have high turnover rates, and employees constantly come and go so there is no reason to put up barriers to entry. Notably, a lot of English teaching companies you will find online actually fall into this category. I've heard people say "if you have a pulse you can get a job there" about more than a few eikaiwa companies. Not surprisingly, these companies also tend to have high turnover and a pretty terrible reputation in the labour market.

You don't need to work at a black company

Working in a foreign country is tough enough without the added stress of being stepped on by an unscrupulous employer. My advice to you is to avoid or turn down jobs where the contract is vague, or you don't like the terms offered. Very often in Japan, you will find that the contract terms are more of a take it or leave it approach, and you won't be able to negotiate better terms, especially in lower-level positions. Even if you do, the pervading company culture in the office will prevent you from enjoying your better contractual terms anyways (such as increased days off), so it's best avoided altogether.

The good news is that not every company in Japan is a black company.

Check their reputation out online first. Search for terms like "company name" + "black". Even just ask around your social network. It can be tricky, because even seemingly great companies in Japan can have a "black company" culture, but if you do your due diligence, you will likely be able to sort out what you're getting into before you join.

Spend your time doing something you like for a company you respect, and your life will be better off for it. Even if your ultimate goal for getting a job in Japan is just to live there so you can enjoy the culture, you'll quickly wish you had a better job with less stress or fewer hours – in the end it's not worth it to compromise. There are many great companies in Japan to work for, so follow your intuition and if something feels off about the company, don't work there!

Globalization: The Myth That Persists In Corporate Japan