Ryan looked back at the clock – 5:40pm. Already 40 minutes after the day was supposed to be over, and the office was still buzzing.

Tanaka-san from Eigyou walked over to Ryan's desk with a concerned look on his face. Not good.

"Ryan-san, can you compile a report about our customer interactions over the last 3 months for Bucho-san? All the data can be found in these 5 Excel files. It's really important and he needs it today."

Ryan thought to himself, "are you kidding me?! If it's so important why is it showing up on my desk at 5:40pm??"

What Ryan knew, but didn't want to admit to himself, was that this was on purpose. He had left before his managers a few times in the past month, so now they were ensuring he had plenty of work to do in a kind of petty, "keep yourself in line" kind of way. 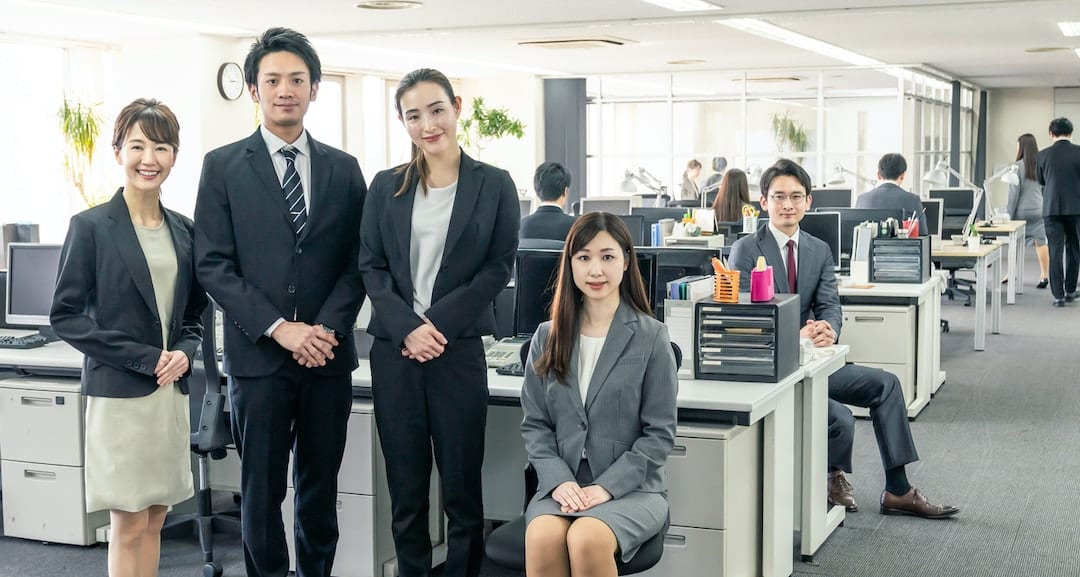 This is the story of leaving on time at Japanese companies.

Ah, Japan, the country of delicious food, rich culture, Gundam, and the inability to leave work on time due to societal pressure. Your company is your family – or, at least they want you to feel that way.

Karoshi, zangyou, overtime, burnout – these are some of the terms that come to mind when thinking about leaving on time at Japanese companies.

The pressure to remain at work until everyone has finished their tasks is a tale as old as time, as far as companies in Japan are concerned. Now, in reality, this is not a strictly Japanese thing. Americans also have a reputation as working far longer hours than most other developed nations (and some absurd gaps in job protection), but that's another story.

Back when loyalty to your company was something to truly be lauded, staying until your boss left could have been seen as a good thing. You gave work your all, and work had your back. Steady raises. Defined benefits and retirement plans. A New Year's party. However, with the advent of gig work and dispatch companies making up a large proportion of employment opportunities for young folks, these benefits are fading away while the expectation of long, hard hours remains.

So why is there still such a stigma against leaving on time at Japanese companies?

There is a huge amount of social pressure in Japan to conform to the norm. 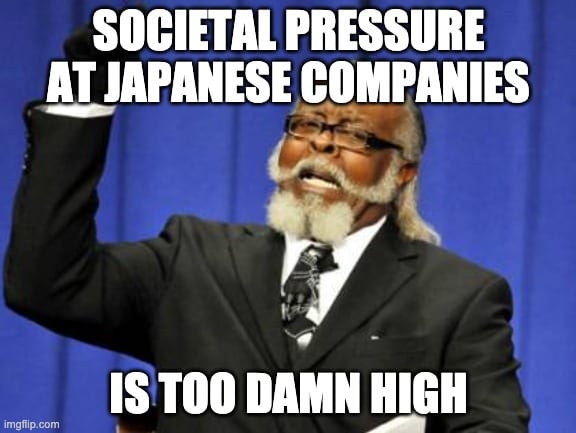 One of these pressures in some companies is to show loyalty to the company. This is usually done by being a good little worker who does what they’re told, and works a grueling 12 hour shift every day.

Boss doing walk-by's of desks around 7:45pm? You better believe it.

Emails from clients (actually expecting an immediate response at 9pm)? Believe it or not, it's true.

The traditional Japanese office place has created a self-fulfilling scenario where the expectation is all employees are always "on", and any request at any time is more or less reasonable. Your coworkers and boss are always watching, and it is noticed and documented if you leave on time more often than the unwritten rules would dictate.

How do Japanese workers live with this?

It varies across the board, but between a lot of teeth sucking and nodding, the average Tokyo office worker would in fact agree that most overtime hours in Japan are unnecessary.

There is a growing movement of younger workers, especially, who are starting to push back against the system, as evidenced by sites like "Kaeri-man" – all about how to get home from work on time.

As the benefits that came with being seishain have dwindled, and fewer employees can even claim that status, there is a growing discontent with the status quo.

There was the Dentsu case in 2016, where a young office worker, Matsuri Takahashi, killed herself after having a mental breakdown (mostly due to overtime). This brought the situation to the forefront in Japan on TV and in some legislation, but meaningful change has yet to really take hold. I broke down the case of overwork in Japan in 2017 in this article, which provides a more in depth look at the effects of overwork and burnout.

Suffice to say, it's accepted as a "less than ideal" reality by most Japanese workers.

But wait, I’m not Japanese! So where does this leave me?

Great question, and one that many foreigners working in Japanese companies have to wrestle with at one point or another.

The good news is, the law is on your side!

The bad news is, nobody really cares.

The Japanese government and many companies will pay lip service to the laws regarding overtime in Japan, including a hilariously destined-to-fail attempt at "Premium Fridays," but things are slow to change.

Some new legislation went into effect in 2018 and 2019, and is currently “implemented” and followed in companies across the country.

I won’t get in to the minor details, but the laws essentially boiled down to a few important points:

Reading these, it seems relatively fair, although that 45 extra hours of work a month cap seems a bit low. They should really increase that a bit. If you're not willing to put in at least 80 hours of overtime a month, what kind of worker are you, really?

The law is the law, after all

All joking aside, you have every right to choose to adhere to the law of the land, because it’s...well, the law. Many self-respecting workers the world over would strongly encourage you to do so. However, do so with caution, because there are some things that you would do well to avoid if you choose to exercise your right not to be a slave to corporate Japan.

First of all, if you’re going to make the tough choice to choose life over work and leave on time, make sure there’s nothing that people are going to hold against you. This means be a good worker, be a team player, actually finish your work on time, and make sure to try to get on the good side of as many of your coworkers as you possibly can. As they say, the only thing worse than a coworker who leaves early is the coworker who leaves early after wasting time doing nothing all day.

Second, don’t make a big scene out of the fact that you’re leaving on time. You do still live in Japan, and as such you should generally avoid sticking out and drawing too much attention to yourself. Don't pack your bag before the bell chimes (yes, there's usually a bell, I know...) and don't start shutting things down until the moment you are ready to leave. A quick otsukaresama to everyone in your general vicinity and out you go.

Finally, and I know this goes against the whole article, but it doesn’t hurt to stick around after hours every once in a while, particularly if it’s to help out a coworker. This can go a long way to show that there are times when you can go the extra mile, the Japanese way. It also makes you look less like that that person who just doesn't "get it" and more like you have a strong sense of timeliness balanced with responsibility.

If you take home anything from this, let it be that you have to figure out your work life balance, which should generally lean towards the “life” side, and don’t be afraid or ashamed to do so. It's become painfully obvious that there is huge resistance to leaving on time at Japanese companies, but you know... Be the change you want to see in the world and all that.

Getting a Japanese Work Visa: What You Need to Know